I’ve come across quite a few stories of women who skip out on their plastic surgeon without paying for their procedure, scamming several thousands of dollars worth of plastic surgery for free. In each case, the doctors sat by like a schmuck, with no way of recovering the payment to which they are entitled.

It always boggles my mind that a plastic surgeon could wind up the victim of such a scam. Surely, there are numerous mechanisms in place, such as a review of the patient’s medical history or running their credit report prior to the procedure, to prevent this from happening. This is serious surgery, and you’d think the doctor would do his research before operating on someone. Apparently not.

I can understand it a little more for a non-invasive procedure like BOTOX. With no downtime after the procedure, it would be a little easier to escape quickly after the injections are completed. But after breast augmentation? How do you let the perp get away? It just doesn’t make sense.

German Plastic Surgeon Gets Scammed Over and Over Again

One German plastic surgeon, Dr. Michael Koenig, was duped by 4 patients. I guess he’s never heard the expression, “Fool me once, shame on you. Fool me twice, shame on me.” Fool me 4 times? Now you’re just an idiot.

Dr. Koenig said all the scams worked the same way: “The women registered under fake names. After the operations, which lasted about an hour, they just ran away.”

Amazing. Someone who had just undergone breast augmentation was able to simply run away – right after being given anesthesia and getting their bodies cut open. I think it’s time Dr. Koenig considers hiring a high school track athlete to hang out at the office and run down shady patients who are too fast for the good doctor and his staff to keep up with.

One patient who called herself “Tanja” asked to go out for some “fresh air” after her procedure. She never came back. She’s now the proud new owner of a $10,000 pair of breast implants for the bargain price of free.

Another woman going by the alias of “Sabine” made out even better. Her “free” breast implants should have cost her over $12,000. And yet, he still got scammed a couple more times. To quote an iconic movie, “Inconceivable!”

Dr. Koenig ultimately decided that he would not sit by idly as dishonest women absconded with their breast implants free of charge. After being duped by 4 patients, he was ready to fight back. There was only one problem – he didn’t know the true identities of the breast implant thieves, and he didn’t even have pictures of their faces.

But he did have some pictures to spearhead the search – Before and After photos.

Armed only with a few snapshots of his finished product, Dr. Koenig created some of the most unusual “Most Wanted” posters ever. They contained pictures of the women’s brand new breasts. 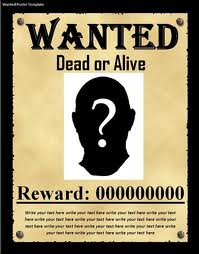 Imagine being a detective at the police station and receiving these “Most Wanted” posters. What are you supposed to do with them? It’s not like you can stare at the rack of all the women you see walking down the street in case they may be suspects.

“Excuse me, miss. You look like a D-cup. Can you take off your shirt so I can compare you to this picture? We’re investigating a breast implant thief.”

That just won’t fly. In fact, the police would be facing some serious harassment lawsuits if they even attempted to pursue those “leads.”

What’s a Doctor to Do?

So how do you avoid being duped by broke women desperate enough for breast implants that they create a false identity and walk out on you without paying? I suppose the obvious strategy is to demand payment upfront. Seems like a fool-proof plan to me. Either they pay you money or you don’t perform their breast augmentation.

But you may also want to be a little more diligent in researching your patients before operating. This, to me, just seems like best practice protocol from any medical professional. Before performing major surgery, check out the person’s medical history. Call their regular doctor. Make sure everything is Kosher from a health standpoint so that you don’t expose yourself to a massive malpractice lawsuit. In the process, you will be able to figure out if something seems suspicious.

Ultimately, I think it’s safe to say that these “Most Wanted” breast posters will not help poor Dr. Koenig recoup the roughly $40,000 he was swindled out of by these shysty women. But hopefully if he reads this post, he may get a clue as to how to prevent this from happening again.

The U.S. Food and Drug Administration (FDA) says that it has heard from women who feel they are not fully informed about the risks of breast implants and need more information in order to have … END_OF_DOCUMENT_TOKEN_TO_BE_REPLACED